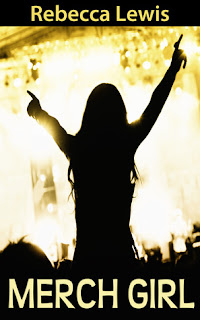 Seventeen-year-old Lacey Kind doesn’t have the guts to talk to cute boys, isn’t a size two, and would rather stay home and listen to music than go to a party. But in the summer before her first year of college, she ends up thousands of miles away from home, in the back of a tour bus, underneath the half-naked body of the hottest teen rock star in the country.When Lacey and her best friend Trina sneak into a Boston nightclub to see their favorite band, they not only get to watch their rock gods perform for the first time, but score a chance to meet the band too. Lacey’s heart races as she comes face-to-face with her idol, nineteen-year-old lead singer, Logan Shire.The girls charm their way into being hired to sell merchandise on Lansdowne’s first summer tour. As “merch girls” Lacey and Trina quickly find themselves transported from their ordinary, suburban life to an exhilarating few months on the road. But they soon realize that life on the road isn’t always a smooth ride...

Goose bumps shot out of my skin as they started their first song. The bass thumped deliciously through my body, and Logan's raspy, sexy voice had me hypnotized. I savoured every sound that spilled out of his mouth.

Merch Girl was like a walk down memory lane. I still clearly remember being seventeen and going to see my favourite bands each time they played. Music was such a huge part of my life. It was such a carefree time, being with friends and getting lost in the music!!

Shy and quiet seventeen year old Lacey and her best friend Trina are in love with the band Lansdowne. Making their way to an invite only gig they can only hope and pray that they manage to sneak in. But by the end of the night they've not only managed that, but have met the band and been invited along on tour to sell merchandise. Is that not every seventeen year old girls fantasy? But will life on the road be everything they hope it will be?

Merch Girl was such a quick, easy and fun read. It is quite faced paced and events tend to come to fruition quite quickly. Told from the point of view of the main character Lacey we get to experience all the excitement of travelling on the road and touring with a band. Lacey has a thing for nineteen year old lead singer Logan Shire. Logan is focused on making the bands first tour a success and while his other bandmates are interested in having girlfriends, Logan lets Lacey know that he doesn't need or want the distraction. But he doesn't count on his attraction to Lacey being so strong.

I stared at him in awe, taking in his beauty. I was still in shock that someone this gorgeous would want to be with me.

Lacey was exactly how I would expect a young girl to act when facing the prospect of spending the summer with their favourite band and crush. She was giddy with excitement, tongue tied when she first met Logan, and beats herself up for saying something silly. Since she was so down to earth it was hard not to like her and get swept up in her excitement. I liked the slower progression of her relationship with Logan compared to how quickly things moved for Trina. And speaking of Trina, I had a hard time liking her. She came off as a bit snarky and rude at times. For the most part she was a good friend to Lacey though.

I loved that the author wrote Logan the way that she did. There were no temptations of the trappings of fame for him. He could be the swoony lead singer of a band with girls vying for his attention in every town but still be good, caring, considerate and loyal.

Whilst this book did feel young at times it does discuss sex, but it is all done in a way that is not too wordy and when things did get a bit hot and heavy the scene would tend to fade out, so it ended up being a really clean read.

I know that I've really enjoyed a book when I get to the last page and I have a real genuine smile on my face and I'm left feeling happy with the way things were wrapped up.