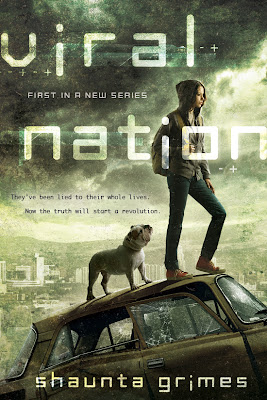 After a virus claimed nearly the entire global population, the world changed. The United States splintered into fifty walled cities where the surviving citizens clustered to start over. The Company, which ended the plague by bringing a life-saving vaccine back from the future, controls everything. They ration the scant food and supplies through a lottery system, mandate daily doses of virus suppressant, and even monitor future timelines to stop crimes before they can be committed.Brilliant but autistic, sixteen-year-old Clover Donovan has always dreamed of studying at the Waverly-Stead Academy. Her brother and caretaker, West, has done everything in his power to make her dream a reality. But Clover’s refusal to part with her beloved service dog denies her entry into the school. Instead, she is drafted into the Time Mariners, a team of Company operatives who travel through time to gather news about the future.When one of Clover’s missions reveals that West’s life is in danger, the Donovans are shattered. To change West’s fate, they’ll have to take on the mysterious Company. But as its secrets are revealed, they realize that the Company’s rule may not be as benevolent as it seems. In saving her brother, Clover will face a more powerful force than she ever imagined… and will team up with a band of fellow misfits and outsiders to incite a revolution that will change their destinies forever.

Shaunta Grimes has worked as a substitute teacher, a newspaper reporter, a drug court counselor, and a vintage clothing seller. No matter which direction she strays, however, she always comes back to storytelling. She lives in Reno with her family, where she writes, teaches, and perpetually studies at the University of Nevada. Viral Nation is her debut traditionally-published novel.

How I was inspired by Shirley Temple and Sea Biscuit

People ask me all the time which books and authors inspire me, and there are plenty of both. But, when I was writing Viral Nation I was also inspired by thinking about what inspired people during the Great Depression. Both Shirley Temple and Sea Biscuit brought some joy and hope to people during some really dark times. Going to a movie or rooting for the underdog horse gave people the chance to let go when otherwise that wasn't an easy thing to do.

I thought about Shirley Temple when I was writing about the Bazaar—a casino in Reno that's been renovated to work as a way for people to gamble for extra things that would make their lives easier. Just like there's a darker side to putting a child on stage to make money off her, the Bazaar isn't all fun. It encourages compliance.

I thought about Sea Biscuit when I was writing Clover and the Freaks. They're the underdogs, but they have more bite than the big dogs expect. It's easy to underestimate a bunch of misfit kids. These kids, like Sea Biscuit, practically dare you to try. I've lived with them for two years, and I can hardly wait for them to show readers what they can do.