ARC REVIEW: Eyes Ever to the Sky (The Sky Trilogy #1) by Katie French 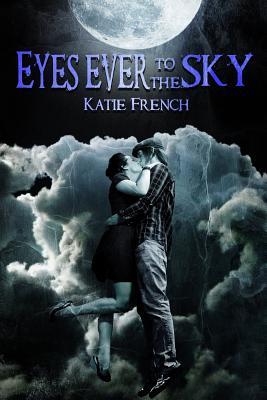 When Hugh wakes up in a smoldering crater—no memory, no clothes—a single thought echoes in his head…trust no one. Frightened and alone, with no memory of who he is, he stumbles upon a grisly murder scene and is fatally shot. He wakes, only to find he can heal himself. He has superpowers, and he’s going to need them.Desperate and bleeding, Hugh stumbles upon fifteen-year-old Cece, who’s got enough troubles of her own. Between caring for her bipolar mother and trying not to get evicted from her run-down trailer, Cece may be the only person struggling as much as Hugh. Drawn to Hugh, Cece finds a love she’s never known. But when the real killer—a man-hunting beast—chooses another victim, Hugh and Cece realize they must unlock the clues to their past if they have any chance at a future.

He woke knowing only pain.
His bones ached like they'd been shattered and glued haphazardly together. His head buzzed like a tuning fork. A bitter taste coated his tongue. He searched for the word and it swam sluggishly up before him. Blood.
He tasted blood.

I'm one of those people that is swayed to read a book simply by the cover and the title and I have to admit that's exactly how I came to find myself reading Eyes Ever to the Sky. I was instantly in love when I saw the cover. Simple in it's muted colours, eye catching and beautiful. And it really fits the story perfectly. And then there is that title!! So beautiful and right near the end of the book the title is woven into the story and the significance becomes crystal clear.

Hugh wakes up in a crater, completely naked and with no memory of who he is. Wandering aimlessly, scrounging for food, hiding out in the bush and trusting nobody. Feeling sick and desperate he decides that he will take a chance and ask for help. That plan doesn't go so well, when he stumbles upon a murder scene just as the police arrive, and assume that he is the killer. As he is trying to flee the scene he is shot by the police. However he doesn't die. In fact he wakes up and is completely healed. It's from that point that the mystery as to exactly what Hugh is really begins.

Cece's life is hard. She is the sole money earner and the sole carer for her mother who has bipolar. They live in a rundown trailer park and besides her best friend Fer, Cece really has nobody else. As her mother swings between the highs and lows of her illness and everything begins to weigh heavily on Cece's shoulders, she reaches out to various family members asking for help. But then she meets Hugh. She can feel his fear and desperation and despite him being a stranger in their small town she has an overwhelming assuredness that she can trust him. Has she finally met someone who can understand her like no one else can?

And what of the unexplained murders that are littered across town?

Eyes Ever to the Sky is told from multiple points of view but the main voices are Hugh and Cece. The few other voices that we get help to fill in the gaps to the story that we wouldn't get to experience otherwise. The story is also told over quite a short time frame and each chapter starts with the day and time so that we know to a tee how things are progressing.


All he wanted was to stop feeling so utterly alone.

That instant attraction and connection between two characters doesn't bother me at all. In fact, in this book, with our two main characters Cece and Hugh, I could completely understand it. They are two teenagers who are very much alone in the world and looking for that connection with someone and they find that in each other. Hugh is struggling to find out who and what he is and Cece, while she has her mum and her best friend Fer they really couldn't be counted on to fulfil the needs that she has. Eyes Ever to the Sky is a story of two teens connecting with each other and trying to find who they are and how they fit into the world.

Katie French tells a story so that you can quite vividly picture exactly what she is wanting you to see. Her writing is descriptive without bombarding or overloading you with too much information. This was a book that I thoroughly enjoyed. While it didn't end in a huge major cliffhanger it did end in a way that has me eagerly anticipating the next book in the series.