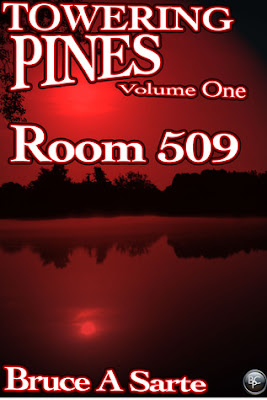 BOOK DESCRIPTION:
When high school superstar basketball player Liam Rider is sentenced to military school to serve out an aggravated assault charge, he thought his life was over. But when Lisbeth Harrington comes into his life she sparks feelings in him he didn't know he had. Suddenly pulled into the past of the historic school by nightmares of his own suicide, Liam and Lisbeth are catapulted forward into thehidden history of ghosts, suicide and murder. Can they solve the mysteries of the military school before Liam becomes the next victim of the paranormal murderer?


Towering Pines is the story of Liam Rider. Hotshot basketball star.  After commiting an assualt he finds himself enrolled in Military school. It's here that he meets Lisbeth Harrington and a friendship is formed. But it's also the beginning of Liam's mysterious dreams and his encounters with the ghosts from room 509's past.

I have to say that when I first started reading this book, I didn't like the characters. None of them!! I thought they were quite the group of angry young men. I felt no Sympathy or compassion for Liam after the attack on his rival team member that lands him in Jail. Yes it was retaliation, but in my eyes that just doesn't make it right!! He is quite conceited and full of himself. And then we have the way that Liam treats his girlfriend Ashleigh. He is just downright rude and nasty to her!!

But as the story goes on we get glimpses into why Liam is the way that he is and slowly we begin to see little changes in him and by the end of the book he was a character that I could say that I liked!! Lisbeth was also a character that had to grow on me. She was fairly brash and cold but then I suppose she is one of the few females in a male dominated military environment. But throughout the book she comes out of her shell and we learn some things about her that I wasn't expecting.

I was completely shocked by some of the things revealed near the end of the book. I hadn't picked that as being the way that things would go!!

I'm really not one for mentioning errors in books and for the most part I can overlook some grammatical errors, but there were some incidents in this book, which had me going back and rereading previous pages to see if I had possibly read something wrong. One thing that comes to mind, is that Liam smashes his mobile phone against a wall, but then a few pages later he is using that phone to call someone. Something like that should really have been picked up in the editing process before the books release.

All in all, I really enjoyed the concept of this story. The author's writing style was really easy to read and the story moved along at a pace that kept me interested in the story. The growth of the main charcters throughout the book was good. I would recommend this book to anyone who likes a read that contains paranormal aspects without a lot of romance.