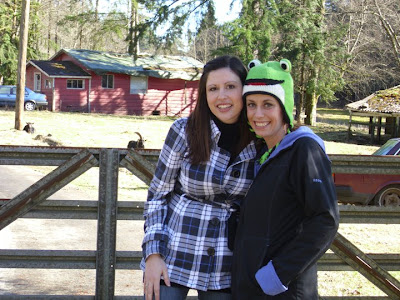 Rebecca Gober
Rebecca Gober was born in Houston, Texas in 1982 and spent most of her life growing up in Dallas, Texas. In between working full time, being a wife and mother of two, Rebecca has never let her passion for reading and fiction fall through the cracks. Rebecca Gober's first book, Night Marchers, which she co-authored with her best friend and partner in crime, Courtney Nuckels, was released in e-book format in October of 2011. They also just released the second book in the Night Marchers series, Redemption, in February 2012.Rebecca and Courtney are downhome country girls powered by chocolate and other random late night cravings. Coined in southern twang they bring new meaning to the word y'all. BFI's since the 6th grade, with a knack for getting into sticky situations, has resulted in countless ideas to write about for years to come.When Rebecca is not working or writing, you can find her spending time with her family and her not so little puppy Neo. 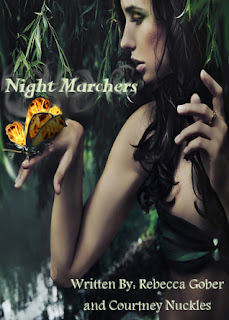 “NEVER, EVER lock eyes with a Night Marcher!” Everyone in Hawaii has heard this warning, except for seventeen-year-old Emma Townsend that is. For most Hawaiians know that looking into the eyes of Night Marcher can strike a curse that will end in death or eternal servitude.Even though her father, who is a paranormal investigator, solely raised Emma, she has little experience in the realm of the supernatural. When she is forced to move with her father to Hawaii, only months before her graduation, Emma finds that her world as she knows it, is shaken when she starts seeing the unexplainable: fire balls in the distance, beating drums in the middle of nowhere and strangers who vanish into thin air. Then one day when she has a run in with a procession of Night Marchers, ancient Hawaiian spirits wandering from their burial grounds to their locations of battles past, Emma has no choice but to believe that the unbelievable does exist.Now Emma must go on the run with the help of a mysterious stranger, as they seek out how to free Emma from the curse of a Night Marcher, who will stop at nothing to get her soul. He would endure a thousand deaths for her, but would she let him? Torn between two men that love her, Emma Townsend is forced to make choices no seventeen-year-old should ever be forced to make. With her friends at her side, Emma embarks on an adventure full of danger, deceit and betrayal as she tries to redeem Kai, the man who made the ultimate sacrifice for her. When Emma discovers that setting a Night Marcher free is no easy task, she is forced to make a very unlikely alliance. How far will Emma be willing to go to save Kai, and will she be able to do so before it's too late? 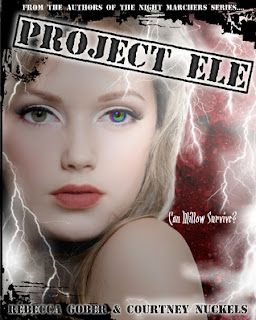 Who is ELE and can Willow survive her? From the authors of Night Marchers comes an all new apocalyptic series with a twist of the paranormal.

Both of us read YA and love it; especially since the stories are innocent and clean for the most part. Also, I think that right now YA has the most unique paranormal stories of all of the genres. To top that off, there is something fascinating and relatable in a coming of age story. The adults who love this genre have been there and the teens that love it are going through it so YA can really connect with pretty much any reader.

Courtney- Kaylee from Night Marchers. Kaylee is me. It’s funny when I read reviews people either love Kaylee or hate her. I laugh because I guess this is how people must perceive me in real life!
Rebecca- Willow Mosby. (Our heroine in our upcoming ELE Series.) She has some very interesting things happening to her in Project ELE. It's fun to write and I'm excited to explore how she continues to evolve with these changes.

Courtney- My writing day begins when I drop my children off at school. After the hectic morning of getting them out of the door (which is often times considered an Olympic event) I need a little break. I brew a fresh cup of herbal tea (with a little dab of vanilla creamer) and get online. I check emails, Facebook etc. I’ll then pull up the document Rebecca sent me from the day before. I’ll read, edit and then write. Usually in that order J. When I’m done putting on the finishing touches of the day I’ll send the document to Rebecca and she’ll take over from there.
Rebecca- For me it would be a typical writing night. I get home from my day job, spend some quality time with my family, then I pop the top on a Red Bull and open up my Mac so I can get to it. I usually write on my laptop in the living room while my family is watching TV or playing video games. I feel better knowing that I'm still in the room with them and not just locking myself away. It's funny too because if I'm writing an intense scene, my husband will look over and ask if I'm okay. I guess my face takes on the emotions I'm writing. So if my character is in a fight, I look mad. Or if my character is hurting I look depressed or sad. LOL!

Courtney- The Forest of Hands and Teeth by: Carrie Ryan
Rebecca- Bloodlines by Richelle Mead (I loved the Vampire Academy series.)

Courtney- Fearless by: Taylor Swift (to say I’m a bit obsessed would be an accurate assumption)
Rebecca- I just turned it on to see and here's what played:
Ain't No Rest for the Wicked by Cage the Elephant. (I had to get this song after watching the intro to the Borderlands video game.) 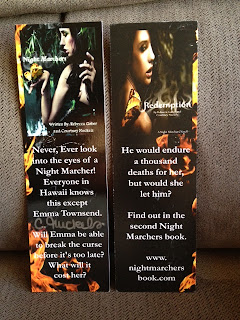