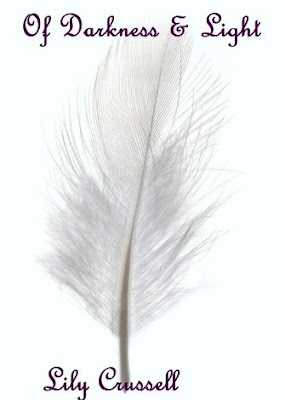 AUTHOR BIO:
Lily Crussell is an author of young adult paranormal romance and fantasy novels. Hailing from Buckinghamshire in England, she lives in a quiet town where nothing ever happens. When she isn’t writing, she works full time in retail, something she is desperate to give up.Writing since her early teens, Lily doesn’t see writing as a career choice, more an obsession that won’t let her rest until her muses are sated. She has been known to lock herself in toilet cubicles at work, scribbling madly on scraps of paper to ensure ideas aren’t lost whilst serving customers. Lily previously considered careers in Anthropology and Teaching, but found neither suited her, especially as they would mean less time to devote to write.

Not only a novelist, Lily spends her time writing Haiku and Sonnets, none of which she’s had the bravery to submit anywhere as of yet.
When not writing, Lily usually has her nose in a book on subjects ranging from Geiko to Veganism, a subject she is devoted to entirely. She has a terrible sense of humour and enjoys tacky comedies, bad horrors and awful tv. She enjoys cute fluffy animals and is hoping to train guide dog puppies if she ever gets out of retail.
Her dream is to write all day, living in a dream world of her characters and only coming out of it to keep house or garden. As a Vegan, she is active in animal welfare issues and believes all creatures deserve respect, regardless of whether they have two legs, four, wings or gills.
CONNECT WITH LILY: Facebook l Twitter l Blog

BOOK DESCRIPTION:
When Elora starts being followed everywhere she goes, she assumes it's paranoia, afterall, if you can't see it, it can't be real...can it? Things grow increasingly weird in Elora's world; the sound of wings, footsteps and physical attacks with no one in sight. Could she be losing her mind? When an attractive stranger saves her from her assailant, she can't help but think he might be in on it. Who can she trust when she doesn't even feel able to trust herself.
FIND OF DARKNESS & LIGHT: Goodreads l Amazon

I mostly read YA books, so it made sense to write what I know and love. Books that are aimed at 'my age' (nearly 29! are all about shopping, getting facials and casual relationships. They don't appeal at all. I think the YA genre is probably the most flexible and diverse there is. You can find everything from Sci-fi, distopia, romance, paranormal romance, historical fiction...the list is endless and that's great for someone who doesn't like to be limited by subject matter.

Lucifer. He's so, so easy to write. He was only supposed to be a really minor character who causes a bit of trouble and then disappears, but he wouldn't let that happen. I wasn't even intending to have him show up again, but he's firmly placed himself in the sequel (Of Blood and Feathers, hopefully if I can sort myself out, this one might see the light of day before the millennium ends!) and the third (unfiinshed) When I started writing the books, I was so in love with Raziel, but gradually I found that Lucifer was fighting for my attention, and won me over.

There's no such thing. I would love to be able to spend all day at home, writing, editing and chatting to you all, but unfortunately I have to hold down a full time job as well as writing isn't making me any money. I'm keeping my fingers crossed for a six figure book deal lol. I find it easiest to write very early in the morning.

I am reading the 'A Song of Ice and Fire' series (Game of Thrones and loving them. I'm on book four. The most recent YA I read was probably 'Shift' which I really enjoyed. I also have 'The Scorpio Races', 'City of Bones' and 'Dark Heart Forever' lined up, but I really want to try the Divergent series as I've heard great things about them.

Argh my ipod is uber embarrassing! I have everything from cheesy pop to Japanese rock (GACKT! He is the 'Japanese singer' in 'Of Darkness and Light') I am obsessed with 30 Seconds to Mars, Charlie Simpson and old Incubus. If I'm writing, I will tend to have soundtracks on that don't have words as I'm too easily distracted. The Silent Hill Soundtracks are wonderfully atmospheric to write to (The survival horror games) or even the Twilight Score is quite nice, Sleepy Hollow, Edward Scissorhands or Fightstar. Music is the single most important thing to me when writing, I can't listen to something happy if I'm writing a sad scene, so I try to match the mood. 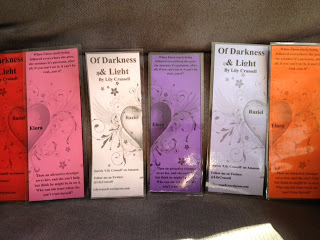 GIVEAWAY: 3 sets of gorgeous bookmarks handmade with love from Lily Crussell.
So 3 winners = 2 bookmarks each!!

a Rafflecopter giveaway
Posted by YA Book Addict at 1:16 PM