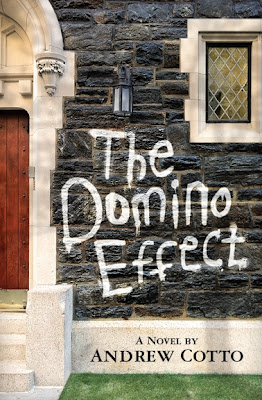 SYNOPSIS:
The Domino Effect is the story of Danny Rorro, a charismatic kid from Queens poisoned by the past. A series of painful defeats have left him scarred and isolated from his neighborhood, his parents, and, most significantly, the benevolent ways of his childhood when he was known as “Domino.” With great insight, imagery and wit, Danny recalls his past in Queens and his coming-of-age at Hamden Academy. This fast paced and powerful story is rich with conflict, humor, tenderness and music—just like life, especially when coming-of-age.

PROLOGUE:
A famous writer once said that anybody who survives childhood has enough stories to tell for the rest of their lives. I survived, barely, and high school was the hardest part. Especially the last year. And to tell the story of my last year of high school I have to start with the first year. Then the second. And the third. These first three parts will be quick and painful. I promise.

In with that one line in the prologue I was hooked!!


This is the story of Danny Rorro. A kid from Queens, who has been raised to accept people for who they are and to always do the right thing. Until there is an event that occurs which will change Danny and the way that he views things. A decision is made to send Danny off to boarding school where Danny's roommate is Terence, the only black student in the whole of Hamden Academy. It's also here that he meets and falls in love with the girl of his dreams, Brenda Divine.


Andrew Cotto is great at telling a story. His characters and the situations they find themselves in are completely believable. There were times that I felt such sympathy and compassion for Danny and then at times when he was being impulsive and hatching plans (and boy, he comes up with some schemes) where I was begging him to just stop and think!!


For me, this wasn't an action packed, fast paced story, but a story about life and the complexities of it. It's a story that deals with some pretty hard hitting subjects, but it's also a story that could quite easily be about somebody that we know. It's a story that show's us that one decision, whether wrong or right can impact on not just us, but all of those around us and put in place a whole chain of events.


A really well written story that I have no trouble recommending! Thank you to the author for the opportunity to read and review it!