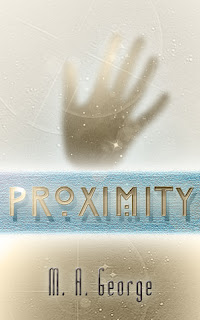 Dr. Palta Capal would be a typical American career woman…if only she were human.She has found her calling in this world as a physician. It’s an ideal outlet for her compassionate spirit...and unearthly healing powers.Palta may spend her nights rereading Jane Austen novels, but she deliberately avoids pursuing her own love story. Human men — attractive as they may be — inevitably grow old and wither, leaving her to grieve in solitude. Frankly, no one has seemed worth the torment.Enter Eric Moran, the intensely attractive and enigmatic new coworker on the scene. With his quiet confidence and warm smile, he manages to draw Palta’s attention. Little does she know that he, too, holds a secret…one that will propel them both into an escalating collision of two worlds.

Review:
This book was a really interesting take on a genre that I'm not incredibly familiar with. I'm not much of a Sci-fi reader so for me it was fun to kind of venture out of my reading comfort zone. It had several good points for me. The first thing that I loved was the amount of detail the author put into the book. The descriptions of events and places were extremely vivid. It was well written and didn't have the grammatical errors that so many self-published works are prone to having.

I enjoyed the main character Palta as well as the cast of supporting characters. There were some things that made the book a little less of a WOW factor for me. The main conflict doesn't happen until about midway to 3/4 through the book. A lot of the "action" is exposition so it's not incredibly fast paced. The plot is a little more politically driven and it can be confusing if you don't follow along and read carefully. Also, the relationship instantly develops with very little interaction which I find a bit unbelievable. It is explained as an intense connection, but I still would have liked to have seen a bit more fleshing out of the interactions between the two.

I did like the alien aspect of the book. I felt the author did a great job explaining the culture and backstory for the characters. It had a great set-up. The follow through was a bit less than what I would have liked but it was setting up for a sequel so I can understand that point. I really hope the pacing is a little faster in the next novel because that would really help the development for the characters and the relationship developing between the heroine and the love interest.

In all, I give Proximity a 3/5 but I have high hopes for the sequel. I think the great concept is there and it will be a great read if it picks up a little more.

Guest Reviewed by Heather for YA Book Addict