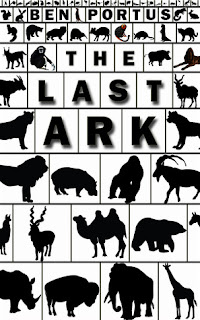 Kidnap. Betrayal. A secret past. A lethal virus. Who do you trust when everything you know is a lie ... and the entire planet is at stake? Sammy Twice is a normal kid - that's what adults always tell him. Until his mum gets abducted in the dead of night. Then everything changes forever. Because Sammy has a hidden past. His home, his parents, even the person he is ... they're all a lie. And who is The Professor? Why is he stealing animals? What is The Ark? Sammy needs to find out fast. The countdown has already started. The flood is coming, and it will destroy everything on Earth.

Review:
Even though this is a YA story it’s refreshing that it had adult aspects to it. I appreciated that the author had adult aspects to the story line. The author did not dumb it down for YA readers, instead incorporated it into the story in a way that a YA reader could understand.I liked the references to video games (call of duty), and the reference to Sean Connery in the movie The Rock. It was cute how Sammy said one of the lines from the movie, it fit the situation perfectly!I loved the introduction to the secret room. The way it’s described makes me want to explore it and the rest of the house.I found the main character Sammy to be very resourceful. He was always thinking on his feet. For a child with a disability, it shows that kids can cope, dream, and do whatever they choose.Julie Twice is Sammy’s mother. She has her own secrets for a reason. Like most mothers she just wants to protect her children. Throughout the story she does everything she thinks is right to protect them. She was very heroic throughout the story.Professor Anton de Puist’s character was well written. He thought he was doing what needed to be done. But the animals suffered. It was heartbreaking to find out what was happening with the animals in the ark. Also his demeanor was very calm most of the time. When he yelled you could tell he was starting to lose it. The action throughout the story was amazing! It kept me on the edge of my seat. I didn’t want to put the book down. I liked how the author incorporated things that could happen in real life, and the world would not know about it. I felt that I was holding my breath in certain situations, waiting, hoping that everything turned out alright. A bit of a thriller.

Guest Reviewed by Colleen for YA Book Addict