BOOK PROMO & GIVEAWAY: The Things We Can't Change Part One: The Prologue by Kassandra Kush 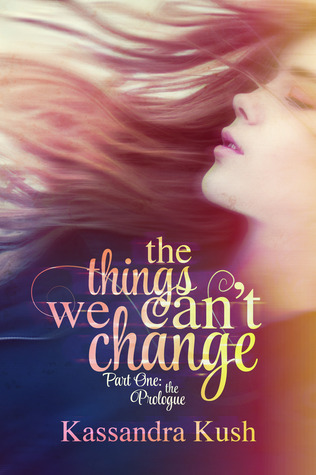 Ezekiel Quain has learned over the years that love and family are nothing to be depended on. After standing strong next to his mom through her cancer, she ran off, leaving Zeke, his dad and little sister to struggle with the leftover medical bills, and a bad taste in Zeke’s mouth about counting on anybody. His relationship with his father is strained, and the only person he cares for is his little sister, Cindy. With looks, attitude, and words, Zeke keeps everyone at arm’s length.Evangeline Parker has it all: money, beauty, brains, and the perfect boyfriend, Tony. What everyone doesn’t see is that she’s trapped, and has been for two years. She lives every day in fear, hiding the fact that Tony isn’t the perfect man everyone thinks that he is. She walks a tightrope, trying to reconcile the Tony of the past with the Tony of the present, and to never, ever upset him. Terrified of anyone finding out the truth, she doesn’t get too close to anyone and has been struggling through the past two years alone.When Zeke stumbles upon Tony and Evie one night and learns of her secret, their worlds begin to collide in a way neither of them expected. Before he can stop himself, Zeke finds himself stepping uninvited into Evie’s life, and urges her to tell someone. Evie refuses, terrified of the repercussions from Tony. Not even sure why he cares, Zeke can only watch from a distance, until disaster strikes and Evie’s secret comes to light, and they are both forced to take action.

I have two Kindle copies of The Things We Can't Change to give away. If you would like to go in the draw to win, just leave a comment on this post. I will draw the winners in a few days.