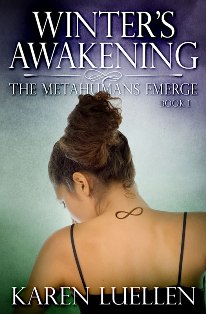 Genre: Sci-Fi
Blurb:
When Dr. Margo Winter goes to work for “The Institute," hoping to change lives with her research, she is appalled to learn it is being used to test and torture children, many of whom have died. Seeing the three survivors, three young children, Margo goes rogue, stealing them away to raise as her own. The tests done on the children altered their DNA, turning them into “Metahumans” complete with fast reflexes, super strength, the ability to heal and unmatched intelligence.

When Margo goes missing years later, the children embark on a journey to reclaim their mother from the evil CEO of “The Institute” who wants them back to continue his plans for the perfect race.


Begin the thrilling adventure into the world of ‘Metahumans’ with Winter’s Awakening, the first book in Winter’s Saga.

Synopsis:
Twelve years ago, three small children were acquired by a corrupt research and development scientist, Dr. Kenneth Williams, and used as expendable lab rats in the testing of “The Infinite Serum.” The serum was designed to biologically enhance humans to become “more than human”—to become “Metahumans.”

Dr. Margo Pullman, a young researcher fresh off her tour of duty as a special ops soldier, blindly accepted a position at The Facility to work with Dr. Williams. Her first day there, she was given a tour and shown the subjects she was to study. Nothing, not West Point or medical school, could have prepared her for the gut maternal instinct she felt roar through her veins. She knew she needed to rescue the babies.

That night, she systematically destroyed all the files that chronicled Williams’ years of research perfecting the Infinite formula. She wrapped the children in blankets and stole them away from that place—from that monster.
Now, the Infinite Serum only exists locked in the genetic code of the three babies curled on the floor board of her back seat as she fled in the night. Margo knew the dangers. She knew they would be hunted to the ends of the earth by Dr. Williams who now not only wants his Infinite Serum back, but wants revenge. He has powerful friends and endless resources in his favor. Margo only has her determination and faith. With the help of a trusted friend, she changed her name to Margo Winter and named the children Meg, Alik and Evan.

As for the children, they lose their innocence the moment the inevitable happens: Williams finds them. The teens go through gut-wrenching battles and terrifying events all while trying to learn who and what they really are.
They never asked to be what Williams made of them. They never wanted to spend their lives running. With their beloved pet coyote, Maze, the children struggle to survive. Will they find the courage to stop running? Will the hunted ever become the hunter so as to rid the world of the pure evil?

Meg, Alik and Evan desperately try to live, laugh, love and fight side by side against an evil that wants to rip them apart, piece by bloody piece.
Who will be left standing when the dust settles?


The little girl was crying even before the door opened. Huge droplets streamed down her plump cheeks. Large dark eyes widened as the man in the white coat entered the room. She looked so small, so helpless. Dr. Margo Pullman stood looking into the girl’s room through a one-way mirror. Everything in the room looked staged, out of place and plastic, like a bad set-up for a play. It was supposed to look like a little girl’s bedroom, but they couldn’t mask the true intent—it was a laboratory. The floor was plastic and dipped slightly toward the center where there was a drain like the kind found at the bottom of a shower. The walls were bleached white and bare. Built-in green countertops had a series of electric outlets across the backsplash. But that wasn’t the worst thing about this room. The worst part was the bed. Straps were obviously positioned at the head and feet. Straps on a child’s bed! Why would they need to tie her down? Oh dear God, what were they doing to this little girl? The look in the little girl’s dark eyes was tragic. She was terrified but too exhausted to care and the combination came across to Margo as clearly as if she had spoken the words. “Just get it over with. Kill me quickly so I can feel peace.” The child knew there was no escape. Margo’s heart broke for her, and she ached with a pain she’d never felt. This little girl was past hope. Even as the child cringed into a fetal position and let out one anguished sob, a man in a white lab coat was poised over her with a syringe behind his back. Margo couldn’t watch anymore, but she knew Dr. Williams was measuring her for a reaction, so the young doctor pretended to study the sign below the one-way mirror. This little girl was called “Case M57” according to the sign. “M” indicated her class: Metahuman. She wasn’t four years old yet and she had been a test subject since she was an infant. Margo’s stomach churned. This was just a baby. What had they done to her?
All Margo wanted to do when she became a doctor was help people. She focused on research in her studies. She felt compelled to help in the development of a cure for neuroscience disorders like autism. Everything she had done was theory until two years ago when she was hired as a researcher in the pathology lab here at The Institute of Neurobiological Studies (otherwise known as “The Institute”). Margo worked herself to exhaustion in her quest to find answers that would someday bring hope to those who lived with autism. The closer she felt to a cure, the harder she would push herself. She got noticed by the company’s chief executive officer, Dr. Kenneth Williams, for her “drive and ambition.” Margo was given a promotion and assigned to the company’s pet-project. It was categorized “Top Secret” so she had no idea what she was getting into when she naively agreed to the assignment. Now, here Dr. Pullman was, staring at one of several “case studies” that would be part of her new work, and she felt like she was going to throw up. Her stomach churned loudly as her tour guide, Dr. Williams, continued his sales pitch.
“And in this room you’ll see the ongoing study of the effects on a two-year-old male subject.” Margo was afraid to look. Truly afraid. But she also couldn’t stop herself. What would this little boy be like after two years of “treatments?” Her eyes scanned the room. At first, she didn’t see him. Then she saw the lumpy bundle under the bed. He was hiding, or sleeping, or both. As Dr. Williams continued sharing information about “Case M61,” Margo had to look away and concentrate on her breathing so she wouldn’t let her panic attack show. “And last, but not least, here is our newest addition to the test subjects. Case M74 is a one- week-old male. We acquired him in a similar fashion as the other subjects. What started as an unwanted pregnancy now has a purpose.” The doctor’s voice took on a strange tenor as though he’d switched to preacher-mode and went on to add, “Now his life will be put to use as we perfect our work in him. He was just given the most advanced version of the formula an hour ago.” Dr. Margo Pullman couldn’t stop staring at the tiny baby lying all alone in his industrial- looking metal crib. The company hadn’t even gotten around to setting up the room to look like a nursery. It had the same design as the other two, plastic floors with a drain in the center. But this room looked even more heartbreaking with dusty cardboard boxes shoved against the opposite wall labeled “Archives Case M1 through 24.” The baby was crying so hard, his lips quivered with the effort. His tiny arms were in the open, startled position. Every ounce of Margo’s humanity screamed in pain for that innocent baby. She wanted to reach in there and steal him away. “The subjects we treat here are expendable in the grand scheme of things. We’ve lost dozens already and these three cases are no more likely to survive, but their lives will have saved millions. The Infinite Project was named because the possibilities are just that, infinite!” Margo tried desperately to contain her rage as she realized all the years of effort she spent thinking she would be helping children. Instead, she was part of a machine that was torturing and killing them! That’s when she snapped. 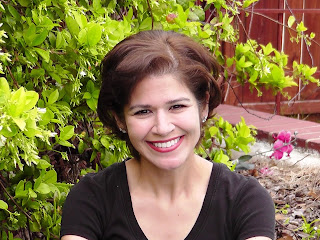 About the Author:
Karen grew up the only girl in the middle of two brothers. She adored both in their own ways, but never really fit into their worlds. Like her characters Alik and Evan, the boys were very different.
If she wanted a playmate, Karen had to gear up to go dirt-clod fighting, be the losing team of (broken) green army guys or brave the flimsy bicycle ramp my older brother was focused on.


Either that, or plan to help erect intricate Lego architecture while hearing the mathematical algorithms and possible big-bang theories of what happened to dinosaurs from her little brother.


Needless to say, Karen suffered a lot of skinned-up knees, elbows and even scraped off an eyebrow or two trying to keep up with the older brother and probably still has a Lego embedded in her thigh from sitting on the floor surrounded by the teeny-tiny pieces in her little brother’s realm.
(Oh, and did I mention she hates math?)

Often by herself, recuperating from her brothers’ attentions, she created entire worlds of make-believe and adventure with stuffed animals and books in her bedroom. Hours of storytelling, personally made sound effects and character voices entertained her to the point of utter happy distraction. Hindsight shows she’s been a storyteller all her life.

Thanks to her brothers, she has a lot of stories to tell. Karen says, ” I love you Jeremy and Field. You’re the best brothers a girl could have–even if you did scar me for life more than once.”