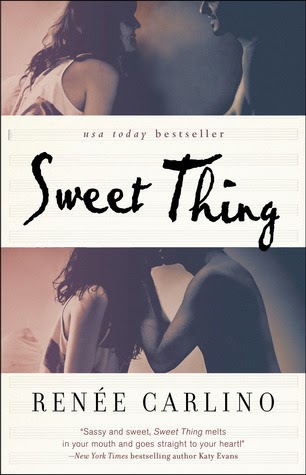 "You have to teach your heart and mind how to sing together…then you'll hear the sound of your soul."Mia Kelly thinks she has it all figured out. She's an Ivy League graduate, a classically trained pianist, and the beloved daughter of a sensible mother and offbeat father. Yet Mia has been stalling since graduation, torn between putting her business degree to use and exploring music, her true love.When her father unexpectedly dies, she decides to pick up the threads of his life while she figures out her own. Uprooting herself from Ann Arbor to New York City, Mia takes over her father's café, a treasured neighborhood institution that plays host to undiscovered musicians and artists. She's denied herself the thrilling and unpredictable life of a musician, but a chance encounter with Will, a sweet, gorgeous, and charming guitarist, offers her a glimpse of what could be. When Will becomes her friend and then her roommate, she does everything in her power to suppress her passions-for him, for music-but her father's legacy slowly opens her heart to the possibility of something more.

The pain of losing someone is always worse when you know you could have prevented it.

Mia Kelly moves to New York after the death of her father. On the plane ride there she meets gorgeous musician Will Ryan. They hit it off straight away, becoming friends and then roommates. Mia takes over the running of her fathers cafe and Will pursues his music. But music is something that they have in common and it's through that shared passion that they bond and become close.

Going into Sweet Thing, my expectations were incredibly high. I had heard such amazing things about it. I Pushed it right up to the top of my review list in my excitement. Unfortunately, it didn't do it for me. Usually I can read a book in one or two days but Sweet Thing took me almost a week to get through. I found it to be quite slow paced and at times it even bordered on boring. Nothing much seemed to happen. Things just plodded along and the story didn't seem to focus on any one thing for very long.

I liked Will well enough. He was sweet and fun and full of love. He had a passion for what he believed in and his love of music, for the simple pleasure of playing was a beautiful thing. He didn't chase after fame or the adoration that comes with it. And he had dreams, although we really didn't get an incite into those dreams until the very end of the book, which for me was a bit of a waste. And then we have Mia. I have to say that I really didn't like her. She frustrated me completely. She was so judgemental and hypocritical. She was attracted to Will but told him right from the start that they would never be more than friends, even going so far as to very condescendingly call him buddy continually. But then when he was even so much as chatting to another woman, she would have a hissy fit and get incredibly jealous and treat him badly. Even though she was dating and sleeping with someone who fit the set of standards that she had. Despite him being a douch!! It's no wonder the poor guy was in knots. Her reasonings for not wanting a relationship with him were ludicrous. She would readily say that he was sweet, kind, caring and loving, but there was no way she could date him because her was a musician and had no purpose. And then there were her random actions. Stopping mid conversation with someone to race into the store to buy alcohol to guzzle at 10 in the morning because she couldn't handle a situation. Or taking up chain smoking. Again, because she couldn't handle a bad situation which was all of her doing. And as for the romance, it was pretty non existent. For me, there just wasn't a whole lot of substance to it and I constantly asked myself why Will felt anything for Mia, who really gave nothing back.

Something that I really couldn't understand was that the first and last chapters were told from the point of view of a character who really has no bearing on the story. It left me a bit confused and I wondered if maybe there was something in the story that I was missing. Yes, there were some words of wisdom imparted but I just didn't get the randomness of that characters appearance.

One of the pluses for me was the music peppered throughout the story. The jamming and the gigs in the little bars, were all really vivid to me and I loved those scenes. They were always the times that Mia and Will seemed on the same page. But even then Mia always seemed to have a way to stuff it up.

Unfortunately, I was glad to see Sweet Thing come to an end. No more of Mia's antics and the following sadness of seeing Will constantly forgive those antics.

A huge thank you to Simon and Schuster Australia for proving me with a copy for review.
Posted by YA Book Addict at 6:33 AM