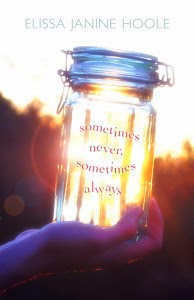 Cassandra fears rocking the family boat. Instead, she sinks it. Assigned by her English teacher to write a poem that reveals her true self, Cassandra Randall is stuck. Her family's religion is so overbearing, she can NEVER write about who she truly is. So Cass does what any self-respecting high school girl would do: she secretly begins writing a tarot-inspired advice blog. When Drew Godfrey, an awkward outcast with unwashed hair, writes to her, the situation spirals into what the school calls "a cyberbullying crisis" and what the church calls "sorcery." Cass wants to be the kind of person who sticks up for the persecuted, who protects the victims the way she tries to protect her brother from the homophobes in her church. But what if she's just another bully? What will it take for her to step up and tell the truth?

I find out on the first day of the New Year that I am the least interesting person I know.

Cassandra Randall is at that stage we all go through in our teenage years of trying to discover who we are. What makes us tick, what we believe in and how to be the person that we want to be. She's questioning the things around her, which is the first step in that discovery. When all of her friends start completing an online survey, Cass can't think of any answers to the questions and believes that she is completely boring. To make matters worse, she is assigned the task of writing a poem about herself for school. Cass has nothing to write. Nothing whatsoever that is worthy of making it's way onto that piece of paper.

So, what does Cass do? She buys a pack of tarot cards and starts an anonymous online blog to offer people advice to their problems. Never did she expect the chain of events that her blog would produce. Her very religious family and her church label the blog as evil, and when her blog is the forum for cyber-bullying, Cass is lost in a sea of wrong choices, emotions and consequences.

I have to say that for almost all of the novel, I didn't really like Cass. I found her to be quite whiny and self absorbed. For someone who was questioning their thoughts and beliefs, I thought she was so easily led by others. And not very nice others either. But the one person that she strove so hard to protect was her brother Eric. Their relationship was wonderful to read. They were always there for each other, even if they didn't agree with what the other was doing.

As for the supporting characters, I loved her brother Eric, Drew, the girl who always seems to be at the centre of everyone's taunts, Cass's classmate and crush Darin and even Cass's teacher Mr D. All of these characters displayed traits that I admire in a person. Traits that we should all strive to achieve. They were caring, kind, considerate and compassionate, almost always able to look at the bigger picture.

The thing that I loved about this book the most was the authors writing style. Even with my dislike for Cass, the author managed to keep me invested in the story. And there was a lot going on. Lots of different tangents to the main story of Cass, but all would impact on her to varying degrees.


"Terrible things do happen, Cass. But so do good things. And sometimes we can't tell the difference between the tow until afterward."

Nestled amongst the usual teenage dramas were some pretty deep subject matters. Bullying, sexuality, religion, drugs and alcohol. But even with the tough subjects, the story was never weighed down or preachy.

Even though I guessed the direction that the storyline with Drew was going to go, it didn't detract from the journey that the characters were taking. I think by the end of the book, with everything that Cass had gone through, she finally became the girl I could like. She started to take ownership for her actions and the impact that they would have on others.

This is the first book that I have read from this author, but it definitely won't be my last.


Thanks so much to Flux, who provided this book via Netgalley.