REVIEW: Side Effects May Vary by Julie Murphy 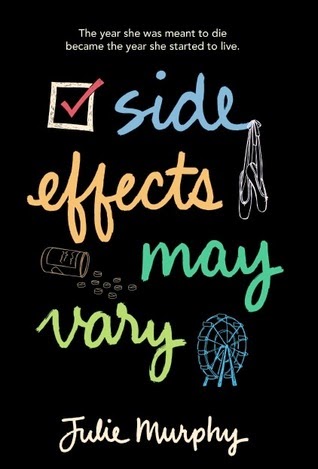 What if you’d been living your life as if you were dying—only to find out that you had your whole future ahead of you? When sixteen-year-old Alice is diagnosed with leukemia, her prognosis is grim. To maximize the time she does have, she vows to spend her final months righting wrongs—however she sees fit. She convinces her friend Harvey, whom she knows has always had feelings for her, to help her with a crazy bucket list that’s as much about revenge (humiliating her ex-boyfriend and getting back at her arch nemesis) as it is about hope (doing something unexpectedly kind for a stranger and reliving some childhood memories). But just when Alice’s scores are settled, she goes into remission.Now Alice is forced to face the consequences of all that she’s said and done, as well as her true feelings for Harvey. But has she done irreparable damage to the people around her, and to the one person who matters most? Julie Murphy’s Side Effects May Vary is a fearless and moving tour de force about love, life, and facing your own mortality.

Cancer would take away plenty. My hair, my body, my life. What I'd never realized, though, was that there was one privilege to dying: the right to live without consequence.


Sixteen year old Alice is diagnosed with Leukaemia. Things don't look promising, so Alice creates a bucket list of things she wants to do before she dies. A lot of things on that list are about revenge. Revenge on an ex boyfriend, and getting back at anyone who's wronged her. Reconnecting with her childhood friend Harvey, it's his friendship that she will count on the most. Just as her bucket list is almost complete, Alice is told that she is in remission. Instead of being happy and over the moon like most people would be, Alice realises that she now has to deal with the consequences of all of her actions.


"You never surprise me Alice, which is such a disappointment."

I have to say that I was quite apprehensive before going into Side Effects May Vary. A lot of people had told me that they didn't like, or didn't feel any connection to the main character. When I first started reading, I couldn't understand where everyone was coming from. Here is a girl who has been battling leukaemia. A girl who has just been told that she's in remission. How could you not be over the moon for her? How could you not connect with a girl who has beaten her disease? But as the story went on, it became so clear to me what the issues were that people had with her. She made it so hard to like her. Almost every one of her actions felt schemed and plotted.

I think at some stage we've all wished karma on someone. I don't think we'd be human if we didn't, but when we take things into our own hands and deliver that karma in the way that Alice did... I think that's a whole new ball game. Yes these people wronged her. Yes they were horrid at times. But to go to the extremes that Alice went to for revenge. I'm just not sure that sat well with me.


Being an imaginary friend was a one-way street. If that's what I was to Alice, then maybe she only ever saw me when she needed me. I wondered what would happen when I needed her.

Then there was the way that Alice treated Harvey. Harvey who is so good. Harvey who has loved Alice through everything that she's gone through and even though he wholeheartedly disagreed with what Alice was doing, he went ahead and helped her anyway. Harvey, who wears his heart on his sleeve and would give her the world if he could. Harvey who was just so beautiful and so special. But he was like her little lost puppy at times, following her around and being loyal to a fault.


On that cold night in January it all slipped into place for me and she became my everything and my everyone. My music, my sun, my words, my hope, my logic, my confusion, my flaw.

But, at the end of the day, I didn't hate Alice. I felt sad that she had to fight such an insidious disease. I felt horrible for the things that her schoolmates did to her. I felt pity that she felt that she had to seek such revenge and then deal with the consequences of the things that she did. I was so unhappy that she struggled to treat Harvey with the respect that he deserved. But I didn't hate her. There were times that I disliked her actions, but there was always something that stopped me from completely giving up on her. I think that it was because that whatever Harvey saw in her, I wanted to get a glimpse of that too.

The story switches rather seamlessly from the past to the present and then backwards and forwards between the point of view of both Alice and Harvey. I didn't see any real structure to it, but it worked really well, since both characters thoughts and voices are very different. Had the book just been told through Alice's eyes, I think my thoughts at the end of reading it may have been very different, so I'm incredibly thankful for Harvey.

Despite my trepidations, I really enjoyed Julie Murphy's debut and I will definitely pick up more of her work in the future.


Received from the publisher via NetGalley for my honest opinion.