REVIEW: The Best Kind of Trouble (Trouble #1) by Courtney B. Jones 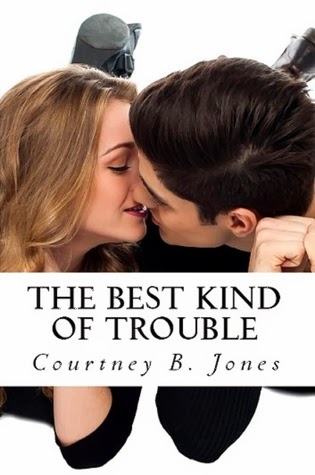 Ashley Parker knows trouble. And Nathan Williams--star quarterback and charming ladies man--is trouble. She knows he'll only break her heart. But that doesn't stop her from jumping in feet first. When her whole world is flipped upside down, her guitar and her lyrics become her only solace. Along with sexy guitar player Caleb Mathews. Fueled by heartache, love, and lust, Ashley finds herself in the best kind of trouble. Boy trouble.

My Thoughts:
First off, let me warn you that this review is going to contain spoilers. Probably lots of spoilers because it would be impossible to review without mentioning things in the book. But they need to be mentioned because they are what has contributed to my rating.

The ease of the writing made The Best Kind of Trouble a really quick read. However there were a fair amount of grammatical errors like missing words, misspelled words and such.

I think that firstly I have to say that I don't think that this could be classed as a YA book. The characters are all around the college age, so for me that takes it into the NA range. Also this book was full of sex. It wasn't as descriptive as most new adult books but it was much too wordy to be young adult.

I never at any stage felt like I knew the characters. Outside of having sex, there wasn't much else to the book. I knew that the males were hot, sexy, muscled, bad boys. But I don't think I could tell you anything of substance about them. Ashley was a girl who had held onto her virginity, wanting her first time to be with someone she loved. But then she gives it away to Nathan without knowing more about him than the fact that he's a player. Oh yeah, but he's hot. And a great kisser. And then he dumps her the very next day. She then walks in on him having sex with someone else, yet she still throws herself at him. And as for Nathan, he just came across as a douche. I really hated how he called her doll face, or doll, or even a lot of the time just face. It just ended up getting on my nerves. He had this big secret that he couldn't tell, but when it was actually revealed, it was a bit of a non event. All of the drama could have been avoided if he had of just come clean to begin with.

Then out of the blue Ashley is a singer/songwriter who gets signed to a recording deal and goes on tour and becomes famous, only to throw herself at the bands guitar player, Caleb. Again without knowing anything about him besides the fact that he's hot, sexy and quite possibly trouble. But after they have sex she feels bad because she loves Nathan. Why does she love Nathan? What about him is she attracted to? I just wasn't getting it!!

And then when she wasn't having sex, she was crying. All the time!! She cried over everything!! Now, I don't mind characters who are broken and are dealing with stuff. In fact, they are the characters that I love most. But you can have a vulnerable character without them being in tears all the time.

Ashley constantly played Nathan against Caleb. When she was with one, she was thinking about the other one and vice versa. My head was in a spin!! But there was something that I liked about Caleb. It may have been his love of his family. He was the only character that I felt I had a little bit of a deeper insight into.

And then there was the ending. It felt very abrupt and completely out of the blue to me. It wasn't what I expected to happen at all and to say I was surprised was an understatement.

This book could have had such great potential if it had of been fleshed out more and the characters more developed. Unfortunately, this book just wasn't for me. When I get to the end of a book, I want to have had a connection to the characters. I want to feel like I know them and unfortunately, that wasn't the case here. I don't think I'll be reading the second book in this series.

This book was gifted to me for an honest review.
Posted by YA Book Addict at 11:26 AM