Today is our stop on The Violet Fox tour. I'm so excited to be involved!! You can read my thoughts on the book and enter the giveaway below. You can check out the rest of the tour stops HERE 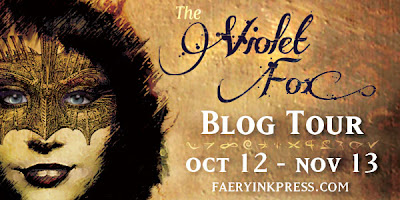 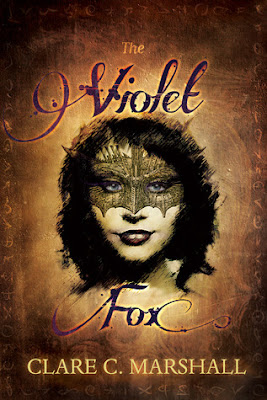 There are two kinds of people in the land of Marlenia.
The Marlenians, who live on the surface,
and the Freetors, who are forced to live underground.
The war between them ended two hundred years ago, but the Freetors still fight for the right to live under the sun. Fifteen-year-old Kiera Driscoll embodies the Freetors’ hopes as the Violet Fox. In a violet cape and mask, she sneaks around Marlenia City stealing food and freeing her people from slavery.
Then the Elders task her with a secret mission: retrieve a stolen tome that contains the secrets of Freetor magic, something the Marlenians both fear and covet. Kiera must disguise herself as a noblewoman and infiltrate the Marlenian castle before the Freetor-hating Advisor finds out her real identity, before her brother is imprisoned because of the secrets he hides, and before she falls any more in love with the prince she’s supposed to hate.
More is happening in the castle than she realizes, and Kiera is faced with a difficult choice. Will she be loyal to her people and their fight for freedom, or will she be loyal to her heart? 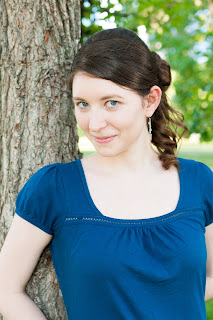 Clare Marshall grew up in rural Nova Scotia with very little television and dial up internet, and yet, she turned out okay. She has a combined honours degree in journalism and psychology from the University of King’s College, and is a graduate from Humber College’s Creative Book Publishing Program. She founded Woulds & Shoulds Editing and Design in 2010 for self-published authors and businesses looking for quality editing and design services. She enjoys publishing books through her publishing imprint, Faery Ink Press, and released her first novella, Within in 2011. When she’s not writing, she enjoys playing the fiddle and making silly noises at cats.

Some months back I was involved in the cover reveal for The Violet Fox and while the cover is eye catching the original synopsis didn't really give too much away.


Run.
That’s what instinct told me.
But in order to save the secrets of my people
and to protect my brother
I have to become the enemy.

That always tends to leave me intrigued, so I added it to my huge TBR pile and thought that it would be something that I would eventually get around to reading. Well, then I was contacted by the author who asked me to be a part of her blog tour. Clare C. Marshall is so sweet and so enthusiastic that it was impossible not to get involved and share in her excitement. So that lead to The Violet Fox being on top of that TBR pile much sooner than I anticipated and all I can say is, thank you to Clare because her book is awesome!!!!

The world is full of different classes of people and so it is in The Violet Fox. You have the Freetors who live underground and you have the Marlenians who live above ground. The Freetors are forced to steal and scrounge for what they need to survive and the Marlenians live off the land, run the businesses and live a completely different existence to the Freetors. Kiera Driscoll and her brother Rordan are fighters which is a section of Freetors who are sent above ground to steal food and wares to provide for the rest of the Freetor population.  But Keira is much more than just your average fighter. She is The Violet Fox. Dressed in her cape and mask, she exudes confidence which comes from the fact that the Marlenians have never been able to catch her.

But Keira is about to be sent on a mission which will change her life and the lives of many. She is to go above ground and infiltrate the castle disguised as a Marlenian noblewoman. It is there that she catches the eye of Prince Keegan. But how will he feel once he learns that she is a Freetor who has deceived him and everyone else.

I absolutely loved the world and the strong and interesting characters that the author has created. Keira is so strong and confident as The Violet Fox but I loved that we got to see her vulnerable side as the story progressed. Rordan was such a protective brother and the direction that his storyline took threw me for six!! The romance between Keira and Prince Keegan was sweet and adorable. But I also loved that there were things that made me laugh. The authors description of Keira being prepared to infiltrate the castle was hilarious as were her descriptions of the ladies in court. I also have to say a huge thank you for not leaving us with a massive cliffhanger. Despite there being another book in the series, this one was finished off nicely by wrapping things up but also leaving us with a feeling of "what will happen next"!!

A fantastic start to the series!! If you like your books to have action, suspense, magic, romance, evil and kick ass characters, then you can't go wrong with The Violet Fox!! I'm so happy that I got to read this much sooner than anticipated and am really looking forward to reading what happens next!!

a Rafflecopter giveaway
Posted by YA Book Addict at 4:00 PM