REVIEW: The Witches of the Glass Castle by Gabriella Lepore 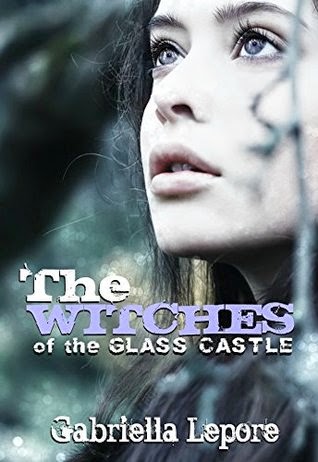 Sixteen-year-old Mia's life is turned upside down when she uncovers her family secret—that she and her brother Dino are witches. Seeking refuge in an ancient castle, the siblings begin down a path that will change their lives forever. Suddenly thrust into a world where handsome warriors command the power of nature and peoples thoughts and actions can be manipulated at will, Mia and Dino struggle to navigate their own allegiances and do what they know to be right, even when everything around them seems beyond their control.

"Take a look around. These are your brothers and sisters. United as Arcana."

This book came highly recommended to me by a friend over on Instagram who was hosting a read-a-long, so I decided to jump on board and give it a go. I had one of Gabriella Lepore's other books on my Kindle, but hadn't managed to get around to it yet, so I was excited at the opportunity to read something of hers.

Mia and her brother Dino have their world rocked, when out of the blue they learn that they are both witches and are sent to Glass Castle for the summer to develop their abilities. Whilst Mia seems to take it all in stride, Dino struggles with it right from the very first.

Dino was a character that I found a little bit hard to like. He was incredibly harsh at times and I just couldn't understand why. It is revealed to us part way through the book, but I think I could have liked him better if I had known his reasons a bit earlier in. I think his storyline was the one that I enjoyed the most though. He is faced with the toughest of choices and the much darker path, which was the most exciting aspect of the story for me.

I liked Mia, even though there were times that she came across as quite young and vulnerable for her age. I liked her willingness to embrace the changes in her and to take the initiative to learn more and understand it.

And then she saw him. Another form of unspoilt nature, astonishingly beautiful in a way that she had never known before. It was Colt.

The romance between Mia and Colt didn't have me on board from the beginning. Colt is very short and abrupt with Mia and there were definitely no warm and fuzzy moments between them in the beginning. But I think Mia was a bit like me, in that she was intrigued by Colt. I wanted to understand him better I think. He is very cocky and self assured and has no problem telling everyone how great he is. Colt is a hunter and he has no room for love. But occasionally there would be a little moment where I could glimpse that Mia was affecting Colt and he wasn't quite sure how to deal with that. It was those vulnerable moments that kept me wanting to learn more about him. And by the end of the book, I was quite invested in the progression of their feelings for each other.

A moonbeam came through the open window, catching the blade with a deadly glint. And then, Colt struck.

I must confess that I haven't read a whole lot of books based around witches, but I think I would have liked a bit more insight into Mia and Dino's emerging abilities and a bit more of the witchy side of things. Spells and potions and such. But in saying that, it didn't detract from the story because there was always quite a bit going on.

The Witches of the Glass Castle was an enjoyable read that kept me entertained throughout. I'm really glad to hear that there will be a sequel and look forward to seeing how things progress with Dino and Mia's abilities and how Colt deals with this thing called love.