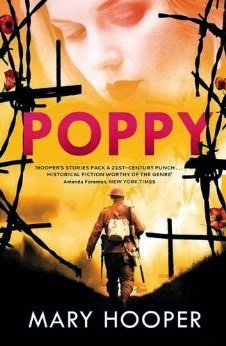 England, 1914. Poppy is fifteen, beautiful and clever, but society has already carved out her destiny. There's no question of her attending the grammar school - it's too expensive and unsuitable for a girl. Instead, Poppy will become a servant at the big house. And she'll 'keep out of trouble'. But Poppy's life is about to be thrown dramatically off course. The first reason is love - with someone forbidden, who could never, ever marry a girl like her. The second reason is war. Nothing could have prepared her for that. As she experiences what people are capable of - the best of humanity and the very worst - Poppy will find an unexpected freedom and discover how to be truly her own person.

The war dominated everything; it was all anyone ever talked about. People speculated about how long it would last, how many would be dead by the end of it, and what it was costing the nation.

I actually read this book some months ago and for some reason I thought that I had posted a review already. I think that comes with having such a huge reading list. I sometimes confuse myself!! Anyway, I actually read this book on what is Anzac Day here in Australia. I thought that was really appropriate since that's the day where we honour the amazingly brave and dedicated men and woman who have served our country, and this book is based during times of war. I was also really taken in by the cover, and I've not read a lot of historical fiction before, so Poppy had me incredibly excited.

Fifteen year old Poppy works as a chambermaid for a family whose social status is way above that of her family. But when an opportunity presents itself to train as a VAD nurse, Poppy sees it as her chance to do something of greater good, and jumps at the opportunity. Stepping completely outside of her comfort zone will reveal strengths even Poppy didn't realize that she had.

Having not read anything by Mary Hooper previously, I have to say that I was really impressed. Poppy dealt with some rather sensitive issues in relation to war. There was a very large focus on the injuries sustained whilst serving your country. And since Poppy is training as a VAD nurse, we get to see a lot of injured returned serviceman and see the effects that those injuries have on them and their state of mind, as well as the effects that dealing with the wounded has on the nurses. There is also a large emphasis placed on the mental impact that war has on the soldiers.


"Do you know what the Tommies call us VADs?
"No. Do tell!" said Poppy.
"Very Adorable Darlings."

Poppy is a young, sweet and fairly sheltered girl when we first meet her. And I don't think that's the case by the end of the book. I really enjoyed her growth. She becomes so much better educated in the impact of war. Her views evolve through a whole range of changes as she sees first hand the tragedy of war. She's actually an incredibly strong character. Being only fifteen and seeing the things that she does, having hands on care of these victims of war. It really does take someone special to deal with that.

There is a touch of romance throughout the book. Poppy is rather taken with her previous employers son, Freddie, and he seems to be with her as well. His one drawback for me, was that he failed to be able to standup and say what he wanted. He seemed to lack a bit of backbone when it came to Poppy and his family, and so I found myself questioning his intentions at times. However, in saying that, the time that he did spend with Poppy, he was rather sweet and caring.

Despite the seriousness of the subject matter, Poppy was a book that was really easy to became completely engaged in. It was also quite a quick read as well. I'm really excited to see that there will be a sequel, which is set to be published in 2015 titled Poppy in the Field. My first delve into the writing of Mary Hooper, will definitely not be my last!!


Sometimes she felt she couldn't bear another moment of this war.


Thank you so much to Bloomsbury for providing me with a copy for review.