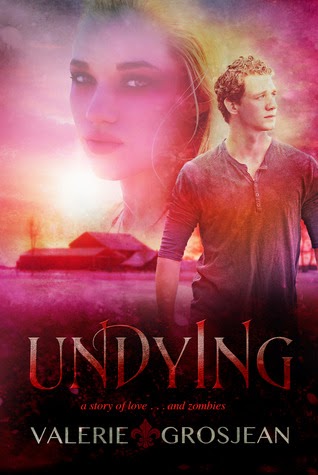 When eighteen-year-old college freshman Christian discovers his dormitory is crawling with the living dead, he knows he has a problem. But once he learns the whole country is overrun by the flesh-eating horde, he must race to protect what matters to him most.

Sixteen-year-old Iris, the girl he loves, is stranded eighty miles away, alone and completely unaware of the gruesome threat surrounding her.

Christian’s plan is to evade the zombies, drive the distance to rescue Iris, and get them both to his family farm—where there are guns, fuel, and everything else they’ll need to survive. His mission seems simple: Get the girl, get to the farm, and stay alive.

Things get complicated when Christian is forced to make an unthinkable choice between Iris and his family. Someone he loves must die, and he must decide.

But the world had turned on it's head, and the dead were no longer guaranteed peace. They walked like vengeful ghosts trapped inside lifeless bodies.

Let me set something straight for you. I can't recall the last time I read a book that contained zombies, if I've ever read one at all in the past. And I certainly don't do gore or horror. I haven't watched a scary movie since I was, well, it's been a while. I'm the person that would be trying to cover my eyes and block my ears all at the same time. I'm a wuss, a chicken, whatever word you want to use, that's me. I even have to watch True Blood in the daytime because I'm so scared. And it's much less scary during the day right?

So what was it that drew me to Undying? First off, I think it was the gorgeous cover. So stunning!! The colours are just beautiful. Then there was the first line in the synopsis. "This is a story of love . . . and zombies." Okay, this could be interesting.

Undying is the story of Christian and Iris, the girl he loves. Although Iris doesn't know that yet, but Christian is ready to tell her. He has it all planned out. But those plans are thrown for a six when his college dorm is overtaken by zombies. When Christian learns that Iris is stranded by the side of the road near his hometown, he makes the decision to get home as fast as he can to save her. But before then he has to make it out of his dorm alive. With bodies falling all around him and more and more zombies popping up, the race to get to Iris is one that will be fraught with danger.


His face held no emotion, no thought, no recognition, but a look that was becoming familiar. I recognized it now as hunger.

When I was reading Undying, I found myself on the edge of my seat, eagerly turning the pages to find out what was going to happen next. Valerie Grosjean managed to have me in a constant state of anticipation as the story went from one zombie encounter to the next. The zombie scenes were gory and descriptive without being too horrific.

Whilst the basis of Christian's journey home was to rescue the girl he loves, romance wasn't a big part of the book. Christian's feelings for Iris were so obvious in the way he was desperate to protect her, but the constant threat of death doesn't allow for too many moments of romance.

The one drawback for me was that I didn't feel a great connection to Iris. With the story being told from Christian's point of view I just didn't feel like I got to know Iris very well. I believed Christian's love for her, but I didn't feel that anything was given back from Iris, so I'm really hoping in the next book to get a better understanding of her. Because seriously, who wouldn't love Christian. He was such a sweetheart and a great friend who has a really big heart.

The story finished rather quickly and on somewhat of an open ending, so I'm really keen to see what happens in the next book. Undying was a great read due to the suspense of finding out what would happen next.

Author Bio:
Valerie Grosjean is the author of the young adult novel UNDYING. She grew up on a Nebraska farm. After college, she married and moved to Northern California, where she lives with her husband and their two young children. Her obsession with zombie movies inspired UNDYING, her first novel and the beginning of the Undying series.