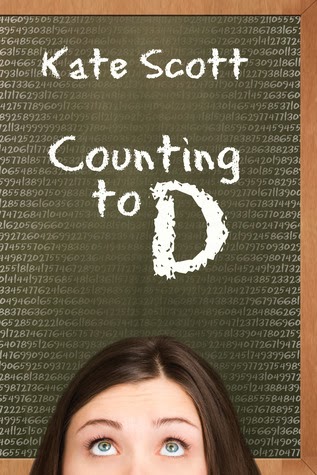 The kids at Sam’s school never knew if they should make fun of her for being too smart or too dumb. That’s what it means to be dyslexic, smart, and illiterate. Sam is sick of it. So when her mom gets a job in a faraway city, Sam decides not to tell anyone about her little illiteracy problem. Without her paradox of a reputation, she falls in with a new group of highly competitive friends who call themselves the Brain Trust. When she meets Nate, her charming valedictorian lab partner, she declares her new reality perfect. But in order to keep it that way, she has to keep her learning disability a secret. The books are stacked against her and so are the lies. Sam’s got to get the grades, get the guy, and get it straight—without being able to read. Kate Scott lives in the suburbs outside Portland, Oregon with her husband Warren. Kate was diagnosed with dyslexia as a young child but somehow managed to fall in love with stories anyway. COUNTING TO D is her first novel. When Kate isn't writing, she enjoys listening to audiobooks, camping, and spending time with her friends and family. Kate also spends a lot of time doing math and sciency things and is a licensed professional engineer.

When I was in elementary school, a friend’s mom tried to ban me from her house. She told me I wasn’t allowed to play with her daughter anymore because I was too manipulative. After receiving this news, I approached my teacher and asked what the word “manipulative” meant. Upon hearing her reply, I responded, “Well, that just means I’m a strong leader. That’s a good thing!”

Now that I’m a little older, I understand that being bossy isn’t always the best way to win friends and influence people. Empathy is a great thing, and there is immense strength in knowing when to keep your feelings to yourself. Deep down, though, I’m still that bossy little girl, and I cannot understand spineless characters.

These days, there are shelves full of books about eyelash-batting girls, swooning after strong—sometimes even predatory guys. How is this even a story? Who are these characters that consist of nothing but an infatuation with a mysterious boy? When I was in high school, I asked one of my male friends to prom, then went on to forbid him to rent a limo because I thought it was a waste of money when I had the keys to a perfectly acceptable station wagon. Yeah, I was just as bossy at seventeen as I'd been at seven, and I've never found these passive protagonists even remotely relatable.

In hopes of combatting the trend of weak, mindless girls in YA fiction, a new class of books is emerging. Stories featuring “strong female characters” are popping up everywhere, and girls are wielding broadswords and rescuing princes in need. In principle, this is great, and I have read many wonderful books with strong heroines. But oftentimes, these characters come across just as one-dimensional as the classic damsel-in-distress.

Female characters should have strength, but they should also have compassion, fear, hope, ambition, and vulnerability. All characters, regardless of gender or genre, should have humanity. And strength is only one small part of that.

As I write these words, I’m living and breathing. I am a real person, who can at times be a little bit opinionated. When I think the people around me would benefit from my opinions, I share them. When I think the men around me are misguided and ill-informed, I enlighten them. When other people, be they male or female, fail to express their own thoughts and emotions, it boggles my mind.

Some people are labeling Samantha Wilson, the main character in my YA novel, Counting to D, as a “strong female character,” but I hope she’s more than that. She doesn’t carry a bow and arrow or wield a sword. She just has a brain. Technically, all people have brains, so this should not be a new concept. But in the current world of YA fiction, Sam’s ability to express her thoughts and emotions is viewed as an unlikely strength.

Every single book with a female main character should be about a complicated person with a head full of thoughts and ideas, and a mouth willing to express those ideas when appropriate. That’s my opinion, and that’s how I live. But maybe I’m not quite as ordinary as I’d like to believe. After all, not all little girls are so bossy that they’re banned from play dates. For some reason, a lot of girls grow up thinking their ideas aren’t valid and shouldn’t be expressed. This feels like a tragedy to me.

So I am speaking up. I’m saying the time for vapid, mindless, eyelash-batting protagonists is over. We need more complex, multi-dimensional heroines who have minds swimming with ideas. Samantha Wilson is one of them. I hope she’s able to find a place on the shelves next to many more modern-day heroines, who are able and willing to utilize the strength they were born with—their brains.