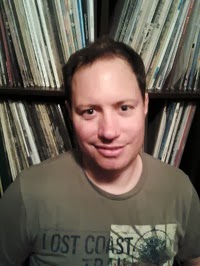 Brian Joyce is the debut author of THE B-SIDE DIARIES, book one of his punk-inspired YA faux-memoir TRILOGY SERIES. When not writing, he can be found rolling around in the backyard with his two boys, going for a run, whistling a tune, or daydreaming with his head in the clouds.Prior to writing THE B-SIDE DIARIES, Brian spent the better part of a decade writing/touring in punk rock and indie bands, which finds it way into THE B-SIDE DIARIES. He is a graduate of Rhode Island College, where he received a Bachelor's Degree in Elementary Education and History. He lives outside of Providence, Rhode Island with his wife, their two boys, and a cat with no depth perception. 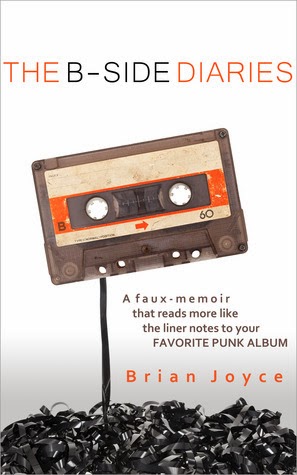 The B-Side Diaries:
Rory is only seventeen years old and six months removed from his friends in Nashville, Tennessee when he receives the news that his best friend Christopher has died—and worse yet, he has been hand selected to deliver Christopher’s eulogy. Over the course of one weekend Rory must confront his fears of public speaking, falling in love, growing up, and losing a sense of what he calls home. Wrought with emotion, and fueled by teenaged doubt, friendship, and punk rock music—The B-Side Diaries unravels the truths about not only what it means to lose a close friend, but also the truths about what it means to be a teenager. Told through diary-like confessions from Rory’s perspective, The B-Side Diaries is written in a faux-memoir style, that pulls the reader into the mind of a teenager sorting out his life, and coming to grips with his loss of innocence. Think “The Big Chill” for teenagers meets Fat Kid Rules the World.

I chose to write in the YA genre because I believe it is an age that suits my writing style and perspective on life. I love the fact that teenagers are open to possibilities, and that they are completely faithful to art that they love. There is something about the passion of adolescence that cannot be reproduced, and I love to write about that. The feeling of losing innocence is a popular theme for THE B-SIDE DIARIES, and I think that's because it was something I remember fighting in my teenage years. Beyond that, I also chose YA for selfish, fatherly reasons. I have two young boys (1 1/2 and 6) who I hope will one day learn from the material in my novels. That will always be something I strive for in all my novels, to teach my children something about life through a story, but it was especially a goal I had when I set out to write THE B-SIDE DIARIES.

It's a delicate thing to write a novel that tells a story, but also teaches without coming across as preachy. I like to think that I accomplished this with THE B-SIDE DIARIES. There are moments of adolescence that have not been written about yet in the YA genre as well, and that's another reason I have chosen the YA genre, to reflect a part of adolescence that is missing in the genre right now, particularly PUNK ROCK MUSIC in YA.
2. Who is your favourite character you have written and why?

I would have to say that my favorite character in THE B-SIDE DIARIES would have to be Dylan. He looks at life in such a positive way. He doesn't let the troubles of life derail him from who he is at his core. He is deep and philosophical, but also is a guy who wants to have fun, tell a joke, and to laugh with his friends. He is caring, and looks out for all of his friends. He is the type of character you just want to hang out with after the story is through, and hope his perspective on life just rubs off on you.
3. Describe a typical writing day for you?

Being a father of two young boys, and having a full-time job, I had to create a crazy writing schedule for myself to complete THE B-SIDE DIARIES. When I first started to write my novel in 2007, I simply wrote when my first son was a newborn, and was napping. During the third and final rewrite, I would put my sons to bed for the night, and sleep until midnight. Then I would write from midnight until 3 in the morning, three times a week. It took me two years to complete the final rewrite due to limited time to actually write. I did this because I didn't want my writing to take away from my family time, it's VERY important to me.

I'm hoping the success of THE B-SIDE DIARIES will help afford me a less crazy writing schedule for the second book in the B-SIDE DIARIES TRILOGY SERIES. So far THE B-SIDE DIARIES has cracked the TOP 100 for Teen & Young Adult Literature & Fiction, and Coming of Age in the KINDLE FREE STORE, twice since it was released on November 1st.
4. What are you reading at the moment?

I just downloaded THE FAULT IN OUR STARS by John Green for my tablet, and I can't wait to dig in. I have read bits and pieces of this book online, but have not had the opportunity to read it all the way through. I can't wait to devour it and be inspired by its beauty. I am big fan of his other books, so I can't wait to read this book. The whole premise of the book is definitely something I know I will connect with and internalize. He is an author who teaches in his writing, and he is a BIG influence on my writing.
5. If you turned your ipod on now, what would be the song that is currently playing?
It would most likely be my friend Trevor's band, PROCESSION CAME OPPOSITE, a punk band from Philadelphia, PA. that does not exist anymore. I LOVE their songs though, especially MY RADIO HAS BEEN OFF FOR YEARS and TAPE OF REASON. You can check both of those songs out here: http://processioncameopposite.bandcamp.com/album/are-we-getting-through They wrote some of the best songs I have ever heard. If not that, then it would probably be a song by THE WEAKERTHANS. They are an amazing band with songs full of lyrics I wish I had written myself, and happen to be my musical obsession at the moment.

Thank you so much for sharing your answers with us Brian. I really look forward to reading The B-Side Diaries.