I'm really excited to have author Nicolai Grunnet here on the blog today participating in our Five Questions With feature. I love the thought and detail put into his answers!! Thanks so much for stopping by Nicolai!! 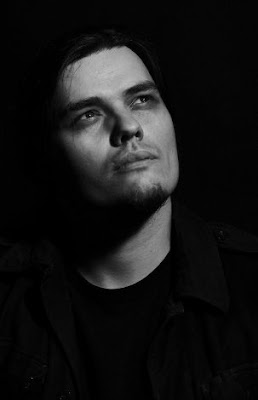 Nicolai Grunnet was born in April, 1982 and still feels younger than ever. During the day he’s a clinical psychologist and at night the author of the psycholocial, satirical fantasy series “Heureka”. Writing has been one of his greatest passions since schools, especially when he was allowed to tell wild fairytales in his assignments (usually about his friends). Once role-playing games were discovered, he happily took up the mantle of game master and storyteller.
He has travelled the world much and met up with many exotic people and their stories. This day he resides in Denmark and has former careers as a warehouse operative, sales clerk, gardening assistant, teacher, actor and now psychologist and author. Who knows what might be next?His style of writing attempts to remain within the conventions of the classical fantasy story and yet twist it as he pleases. They are stories of ordinary people with ordinary problems, in a disorderly world. While satirical elements are certainly present, through various clichés and pop cultural references, the stories often present an underlying gloomy theme.Gaming takes up a big part of his life. D&D, MMO’s and Warhammer, just to name a few. Alternatively, he takes his pet-hedgehog for walks around the house. 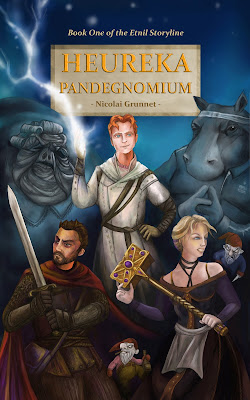 Pandegnomium:
When hit by an earthquake, the world economy is shattered and an international crisis looms over the capital city of Khar, along with its sister-countries. Tyrant von Bhool is in despair till a force from beyond the veil of reality decides to lend a hand. Managing to capture a creature of myth, the Tyrant is inspired by its ability to petrify living beings, and soon after makes the world a fortune from the newest invention: petrified gnomes for the garden.Yet, saving the world economy is not the true intention behind the apparently nice gesture. In fact, there might not even be a world left to save.The only ones to step in are: a warrior, who's quite lost in the world and only knows where he doesn’t want to be, a wizard with Arcane Deficit Casting Disorder, and a barmaid, who'd much rather be pouring drinks than cleaning up after a tavern brawl between the forces of existence.'Pandegnomium' is the first book in the Etnil storyline.

1. Why did you choose to write a book in the Young Adult genre?
I’ve been asked this question a lot. I always tell people they need to know about my other profession before I can truly answer that. I’ve been working as a clinical psychologist for a couple of years, but much of it has been treating (or at least trying to) people with severe traumas and PTSD. Stories of war, assault, rape and torture were common elements in my life, for well over half a year.It didn’t take long for me to realize how these events and pictures tended to stick with me in a bad way. Eventually I had to find a way to take my mind off these gruesome things when I got home, which is why I turned to writing. As the perceptive readers have commented noticed, a common theme in my stories is about finding your place in life, often after some unforeseen event shatters it up for good. It’s a challenge so many of us recognize.When you read my books, you don’t have to be Freud to notice that psychology takes up a significant part of them, whether in the subtle or more direct form. After all, this is what I’ve been trained for and what interests me. For example; my newest release ‘Pandegnomium’ was originally aimed for a much younger audience, but eventually turned into a story about more mature themes. In April I hope to launch my second book, “Bloody Peasants”. It originally started as a children’s book, but ended up as a violent, aggressive and metaphysical story; probably some of the darkest fantasy I’ve written. When I look back upon it, it’s clear that much of what I was working with in real life influenced this story. It’s about war, shattered dreams and the pain it is to realize that some things might be too late while still being naïve (or courageous?) enough to fight for the impossible. It’s a tendency I don’t think I can avoid. So I suppose the short answer to that question would be; It’s just who I am and what my heart reflects.2. Who is your favourite character you have written and why?
I actually have several! Most of them haven’t been written yet but will appear in the third book. For now, I’ll have to stick with the wizard Etnil, the main protagonist who even had the first storyline named after him. I’m sure he hates me for it.Etnil is the fantasy equivalent of the young man sitting in the back of the class, mostly minding his own drawings and dreams. You’ve probably known someone like him; the kind of boy they all seem to make huge fuss about and don’t know how to deal with. The teachers fret and the bullies beat him. And in fact, all he wishes is to be left, live and die alone.As he describes, he can’t see the idea in bothering with Life, because Life never seemed to bother with him. His parents never did, his school diagnosed him with Arcane Deficit Casting Disorder and pretty much everyone around him is afraid because he’s a wild mage. One of the few wizards whose power hasn’t been quenched in academic studies.What makes Etnil interesting to me is how hard he is to work with, his nature taken into consideration. He pretty much has someone holding his hand all through Pandegnomium and he has so little faith in himself. While he has his sentient, magical powers to look after him, he describes them as a ‘watchful father at the playgrounds, who will not only beat up those who bully you, but also break their legs and take a dump down their throats’. This doesn’t provide you with a person who wants to travel the world, so making him work in a story is like struggling with a very stubborn and dangerous child.At the same time, his understanding of the world and social interactions is so limited that you wonder if he really should be out there, after all. For example, I still love how he, in his youth, observed that the loudest boys at the academy also got the most girls and therefore decided the logical thing would be conjure up a deafening thunderclap in the bar. To this day, he still doesn’t understand why the girls weren’t all over him, but ran away screaming instead. 3. Describe a typical writing day for you?
It usually doesn’t start too early. I’m a nocturnal person, a trait inherited from my mother. I usually get up around the evening, listen to music and reply to some mails or forums just to get started. I also have a pet-hedgehog that needs some time and cuddling.The main part of the writing begins around midnight and typically runs till around 7-8 in the morning, on a good night. I’m notoriously bad at writing in sunlight.Is there such a thing as Literaturepirism?4. What are you reading at the moment?
I’m still hard at work on the Legend of Drizzt - Streams of Silver by R.A.Salvatore. I’m not going to lie; Salvatore was likely one of the biggest influences that made me take up writing. I’m an immense fan of his descriptions, especially regarding fights and action scenes. I’m still on the fifth book in the series though, and though I haven’t counted, I know there’s a long way yet.I wish I had more time to read stuff from my fellow indie-authors too; hope I will get around it soon.5. If you turned your ipod on now, what would be the song that is currently playing?
Malukah’s cover of “The Dragonborn Comes” from Skyrim. I have a strange tendency to listen to soundtracks and music from computer games when I’m out, mostly because it helps with inspiration. And in this particular case the song fills me with peace and hope.