WAITING ON WEDNESDAY #76: Love and Other Unknown Variables by Shannon Lee Alexander 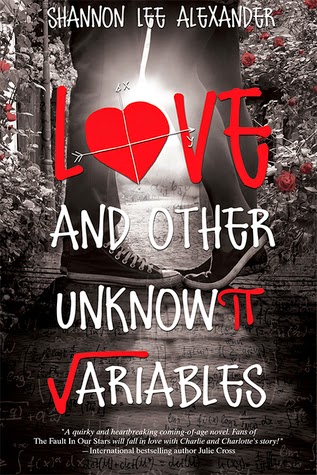 Charlie Hanson has a clear vision of his future. A senior at Brighton School of Mathematics and Science, he knows he’ll graduate, go to MIT, and inevitably discover solutions to the universe’s greatest unanswered questions. He’s that smart. But Charlie’s future blurs the moment he reaches out to touch the tattoo on a beautiful girl’s neck. The future has never seemed very kind to Charlotte Finch, so she’s counting on the present. She’s not impressed by the strange boy at the donut shop—until she learns he’s a student at Brighton where her sister has just taken a job as the English teacher. With her encouragement, Charlie orchestrates the most effective prank campaign in Brighton history. But, in doing so, he puts his own future in jeopardy. By the time he learns she's ill—and that the pranks were a way to distract Ms. Finch from Charlotte’s illness—Charlotte’s gravitational pull is too great to overcome. Soon he must choose between the familiar formulas he’s always relied on or the girl he’s falling for (at far more than 32 feet per second squared).

I seem to be reading lots of paranormal and fantasy lately, yet I'm such a huge contemporary fan. This is one that I'm definitely going to be reading. The early buzz has me super excited!!
What book are you patiently waiting for the release of?