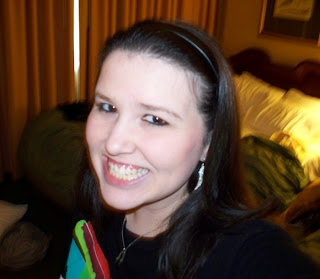 Author Bio:
Nikki Godwin is a Young Adult/New Adult author of both commercial and LGBT teen fiction. She is a city girl at heart with a soft spot for surfers, rock stars, and graffiti artists. She cannot live without Mountain Dew, black eyeliner, Hawthorne Heights, and candles from Bath and Body Works. She secretly wishes she owned a giraffe reservation. When not writing, she not-so-secretly stalks her favorite bands. She may or may not completely love One Direction. 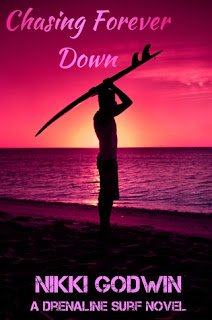 Chasing Forever Down ( Drenaline Surf #1):
After seventeen-year-old Haley Sullivan meets a mysterious stranger who plays by his own rules, she's more than determined to learn every trick of the trade from the master himself. But her dream-chasing mentor disappears after that night, and according to the local newspapers, he's been dead for years. Knowing he's very much alive, Haley enlists best friend Linzi to join her on a scavenger-hunt-style road trip that ultimately lands them in the surf town of Crescent Cove, California. Mystery guy is no mystery here, though – he's Colby Taylor, the west coast's biggest professional surfer. If Haley wants to talk to the wave rider again, she'll have to get past his four intimidating bodyguards who are highly skilled in the business of sending starstruck fangirls back to where they belong. Haley is up for the challenge if it means chasing her dreams and escaping the perfectly corporate future that's been planned for her. But dealing with these bodyguards isn't exactly what Haley imagined it'd be. Sure, being thrown off a jet ski sucks, but falling in love with one of them might just be worse. 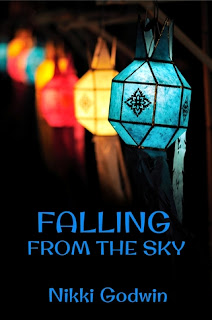 Falling From The Sky:
All stability in sixteen-year-old Ridge McCoy's life crashed and burned in the plane crash that killed his dad. This summer-long basketball camp is his chance to improve his skills and escape his problems back home. But his summer plans take a turn in an unexpected direction when he meets Micah Youngblood, the guy who runs the carousel at the local mall and has a reputation for devouring straight boys' heterosexuality for breakfast, alongside his chocolate chip pancakes. Ridge needs a way to avoid the guys at camp, whose only quest for the summer is to drown in beer and hook up with girls. So when Micah offers to explain how the ten unique horses on the carousel are significant to his tribe, Ridge takes him up on it. Still, Ridge can't decide if this is a bad thing or not. All he knows is that he hasn't felt this alive since his dad fell from the sky, and as the horse adventures come to an end, Ridge finds himself falling as well – for Micah.

American Girl on Saturn:
The summer after graduation is supposed to be that first real taste of freedom - but not for eighteen-year-old Chloe Branson. Just as that breeze of freedom is making its way into her galaxy, her secret-service-agent dad drops a meteor-sized bomb of bad news on her and her sisters. An attempt has been made on the lives of Canadian boyband, Spaceships Around Saturn, during their USA tour, and the guys have to go into hiding ASAP. The only problem? In the midst of the crisis and media frenzy, their dad volunteered to hide the guys...in their house.Six-year-old Emery is as ecstatic as any self-proclaimed Saturnite would be, but Chloe and her seventeen-year-old sister Aralie watch their summer plans crash and burn like a falling star. The SAS guys aren't happy with the situation, either. Bad boy Jules picks fights with Aralie about everything from his Twitter followers to his laundry, and heart-throb Benji can't escape Emery's fangirlisms for more than three minutes.But after the super-cute Milo kisses Chloe during a game of hide-and-seek, she finally understands what Emery means when she talks about SAS being "out of this world." If this is what Saturn feels like, Chloe doesn't want to come back to earth.

I finally decided to take the stories out of my brain and put them on paper while I was in high school, so I think Young Adult chose me rather than me choosing it. It's definitely a phase in life that everyone can relate to. I know my YA years were much more fun than truck payments and day jobs, so it's a great escape when I write!
2. Who is your favourite character you have written and why?

My favorite character is definitely A.J. Gonzalez (in Chasing Forever Down). He’s the type of character I’ve been waiting to write. He’s edgy, a bit too wild, and very realistic. I like characters who feel real and jump off the page. For me, those are usually the edgier characters with a lot of flaws.
3. Describe a typical writing day for you?

Open Word document. Read over last thing written. Cringe because I hate it. Close Word document. Spend hours on Facebook and Twitter. Check e-mail one hundred times. Finally re-open Word document. Allow sleep deprivation to set in. Write like crazy. Lather, rinse, repeat. <-- Sadly, this is very accurate. I write better late at night, when the world is dead, and I overthink everything, so I usually get my best writing when I'm too tired to overthink.
4. What are you reading at the moment?

I recently finished Merch Girl by Rebecca Lewis, which I adored and highly recommend. I haven't started a new read though because I'm working on a new project myself with a strict deadline. I'm also going to be proofreading for my CP's final draft of her book soon, and I'm diving into edits for my sister on her upcoming release.
5. If you turned your ipod on now, what would be the song that is currently playing?

"All Around The World" (acoustic version) by Justin Bieber or "Same Mistakes" by One Direction. I can't remember which one I last listened to, but those are my background music songs when I write.